It’s dark. A few minutes after midnight. An almost full moon shines down upon a hollow patch of clouds, turning them silver, and leaving only a little light left to illuminate the hallowed ground below. A gentle wind rises and rushes through the bony remains of harvest, causing the canes to rattle and shake, and disturb the peaceful silence. Shadows are cast against the dirt in homage to their source; thick, gnarly trunks, thin, spindly canes, and a cross…

The rising wind causes the clouds to part even more, allowing the moon to shine down, and silently reveal another shadow on the ground. A human shadow. The silhouette of a man, moving, climbing, clambering over a stone wall and into the most worshipped vineyard in the world…

Ata Rangi is, probably, most famous for its pinot noir. In February 2010, the wine was the recipient of the inaugural Tipuranga Teitei o Aotearoa Award (Great Growth of New Zealand), and regularly receives due praise from pundits, experts, oracles, and authorities on fermented grape juice the world over.

“I found out about a winemaker in Auckland who had some pinot clones that were supposedly taken from Romanee Conti and hidden inside a gumboot,” recalls Ata Rangi’s founder, Clive Paton, “but they’d been seized at Auckland airport by the only customs officer in New Zealand to have an interest in pinot noir…”

This customs officer, Malcolm Abel, was also a budding young winemaker, with plans for a vineyard in Auckland. Presumably, through talks with this would-be vine smuggler, Abel instantly recognised the significance of the gumboot clone, and had it sent off to the viticultural research station at Te Kauwhata. He then waited until the first cuttings became available and planted them.

“Clive was the lucky one who had heard about this guy who had some pinot clones from Burgundy,” explains Ata Rangi’s winemaker, Helen Masters, “and he had the balls to ask him for two dozen cuttings, back in the 1980’s, when pinot noir was a sight unseen in New Zealand.”

Clive founded Ata Rangi in 1980, after he sold a herd of cattle and decided he wanted to pursue winegrowing instead. After working a vintage with Malcolm Abel in Auckland, he asked if he could take back a few pinot clones to plant at his fledgling vineyard in Martinborough.

“No one really knew what would and wouldn’t work, back then. It was really just a matter of experimenting with whatever you could get your hands on,” says Clive.

Ata Rangi is a small winery in Martinborough, New Zealand, located on the southern end of the North Island. Clive was one of a handful of farmers who pioneered the planting of grape vines in the area, back in 1980, on a small stony block at the edge of Martinborough village.

“Ata Rangi means ‘dawn sky’, or ‘new beginning’,” explains Clive, “which seemed to fit with what I was doing at the time, planting mostly pinot noir vines on an old sheep paddock just outside of town.”

“Organic farming was inevitable, for us…”

As with most of New Zealand’s wine regions, Martinborough’s climate easily lends itself to an organic regime, which Clive has been pursuing since 1989.

“Organic farming was inevitable, for us,” says Clive, “but, I’ll never forget when people first realised that grape growing had started up here, and we had just about every agent from the agricultural servicing industry show up and tell us what we should be spraying.

“I remember a guy pulled out a spraying schedule for Auckland and Gisborne,” Clive continues, “and he told me that this same information was applicable to me here, even though the climate was so much dryer than up north.”

Martinborough is the North Island’s driest region with an average rainfall of around 780 mm per annum – compared to 1051 mm in Gisborne, and 1240 mm in Auckland. It’s truly cool climate, and experiences one of the longest growing seasons (from flowering to harvest) in New Zealand.

“It’s just a fantastic place to grow grapes, especially pinot noir,” says Clive. “We’re surrounded by sea, which moderates the temperature and gives us a long growing season, which means a longer hang time for flavour and complexity to develop in the grapes.”

Ata Rangi is certified organic by BioGro, is one of only a few wineries in the world to be certified by ISO 14001, and was one of the founding members of the Sustainable Winegrowers New Zealand (SWNZ) program.

“We were part of the first SWNZ trial, and it’s been fantastic to see it develop over the years,” says Clive.

“Syrah is us future proofing for global warming…”

“I always cringed at the way we grew grapes in the early years, because a lot of farmers came in to grape growing and would just spray whatever they could get their hands on,” continues Clive.

“I never thought we could change the attitudes of these farmers so much in such a short amount of time,” says Clive.

Continually committed to sustainability, Clive has recently been turning his attention to syrah.

“Syrah is us future proofing for global warming,” reveals Clive. “In the 35 years that I’ve been here there’s been a huge change, particularly in the winter time, where we get at least a third of the frosts we used to get.”

As the world continues to warm, winegrowers across the world are looking at ways to mitigate the effects of climate change on their business. The very essence of sustainability is to keep going, and the only way to effectively do that is adapt, or die.

“Syrah ripens here a little later than everything else,” says Clive, “and it seems to do well on a lot of our warmer sites. We’re also looking at planting things like (cabernet) franc and tempranillo as well, to try and curb our susceptibility to climate change…

“But, syrah,” continues Clive, “is definitely a variety that suits this region, and, one day, might even be as good as our pinot noir…”

Harsh, white, fluorescent lights shine bright from all angles, glaring into every split, crack, and crevasse of the bleached steel gangway that leads its passengers, weary from their recent flight from Paris, into the stark, clean, and polished airport arrivals terminal. Huge air conditioners blast cold air out of giant fans above the concourse. Fresh air will have to wait. Sweat begins to bead on the traveller’s forehead, pooling in the worried furrows above his brow, and then dripping, slowly, down onto the dirty white t-shirt he’s been wearing for almost two days…

He walks, quickly, towards the baggage carousel to collect his old suitcase that’s carrying so many precious things. As the bags from flight AKL 372 begin to tumble out onto the conveyor belt, three official looking men start making their way over. As the bag rounds the curb of the clunking carousel, the traveller reaches down to pick up his battered suitcase, when three shadows are suddenly cast onto the shiny linoleum floor… 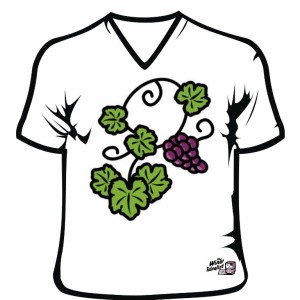 Get the /NEW/ Edition of The Wine Idealist landing in your lap(tops) every week!

Error: Twitter did not respond. Please wait a few minutes and refresh this page.

© Daniel Honan / The Wine Idealist - 2015. Unauthorized use and/or duplication of this material without express and written permission from this blog’s author and/or owner is strictly prohibited. Excerpts and links may be used, provided that full and clear credit is given to Daniel Honan and The Wine Idealist with appropriate and specific direction to the original content.
Loading Comments...
%d bloggers like this: